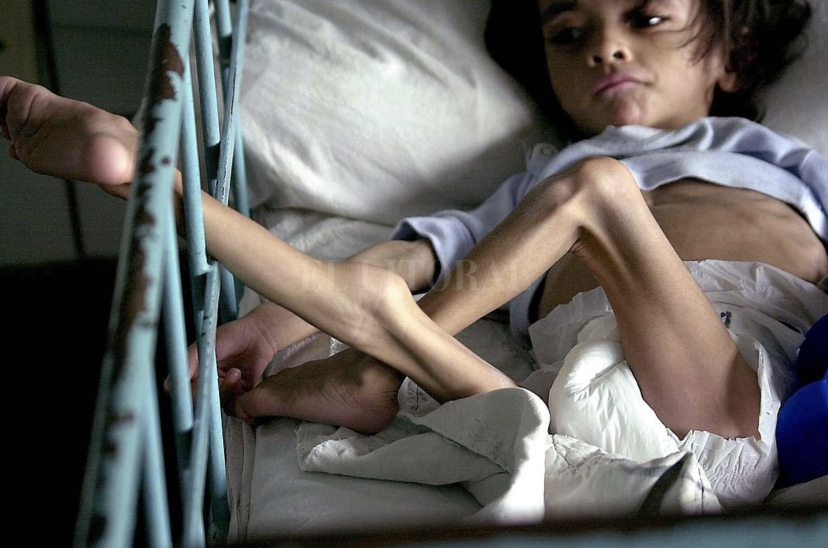 At least 10 children in the Wichi community have died from poor nutrition or a lack of food this year. That is already double the number who died from malnutrition in 2010.

Argentina is one of the world’s biggest food exporters and it has shocked the nation to discover that some of its population are not getting enough food.

Almost 30,000 people live in this region of north-west Argentina, making up around 200 communities. The tribe we visited is known for its reticence. Its members are wary of contact with outsiders.

The areas where they live are a picture of desperate poverty. The houses are mostly wooden shacks, with blankets as makeshift walls, where there are any at all.

We found hardly any access to clean water or sewage systems in the communities we visited.

“When children who lack proper nutrients also face these sorts of sanitary hazards then the risk of disease increases,” said Enrique Heredia, director of social medicine for the province of Salta, who regularly visits the indigenous communities to provide free medical attention.

“A bout of diarrhoea or dehydration can kill them in no time.”

The local authorities often do not register the fact that malnutrition is the underlying condition that links these deaths. Instead, they note down only the disease that is immediately responsible.

Locals depend on government help, but that is not always enough

But doctors admit that malnutrition is an important element in explaining these deaths.

“Undoubtedly the lack of proper nutrients is a factor that contributed to these children dying,” said Mr Heredia.

Marcelino Pérez welcomes us to his community, called Lapacho II, just outside a small town called Tartagal, near the border with Bolivia. He introduces himself as the tribal chief, leading around 300 Wichi and several stray dogs.

“All I know is that we don’t have food. Sometimes we can’t get enough work or money to cover our needs. And what we receive from the government is not enough either,” he said.

In Lapacho II we see many children playing in the dirt, with torn clothes and telltale signs of extreme poverty.

But this is not Africa. They are not extremely thin and do not have protruding bones.

Malnutrition can be a silent killer, we are told, as it weakens the system until a minor disease can prove fatal.

This community is an image of the refugee camps you see in places hit by natural disasters. No earthquake or tsunami has hit this territory but evidently their disaster is deforestation.

“We used to get our food from the forest and now we have had to adapt to the white man’s food, which is not sufficient,” he said.

Since ancient times the Wichi have been a tribe of hunter-gatherers. For centuries the forests in the area provided them with food high in protein, like fish and fruit, which kept them in good health. But all that has changed now.

The government of Salta says that between 2000 and 2006, at least 600,000 hectares of forest – an area four times the size of Greater London – was flattened in the region by farming corporations that harvest soy beans, corn or other grains and cereals.

The public road we took was flanked by miles and miles of soybean fields, which have replaced the forests that used to grow there.

However, these commodities are not going directly to the local communities, although they are what has kept Argentina’s economy booming. Last year its GDP rose by 9.5%, a figure surpassed only by China and India.

“The deforestation was stopped a couple of years ago by a judicial ruling, but it has already changed the indigenous communities’ way of life,” said Claudia Lungu, a member of Asociana, a local organisation that deals with the social issues groups like the Wichi face in Salta.

“Although we see that these groups are now getting more help from the authorities, we believe that they are much poorer than before because of the problems created by deforestation, like malnutrition,” she added.

Some of the places we visited were tiny indigenous communities completely surrounded by crop, like little islands of human life in the middle of fields of soybeans. The only way in or out is along the farmers’ roads.