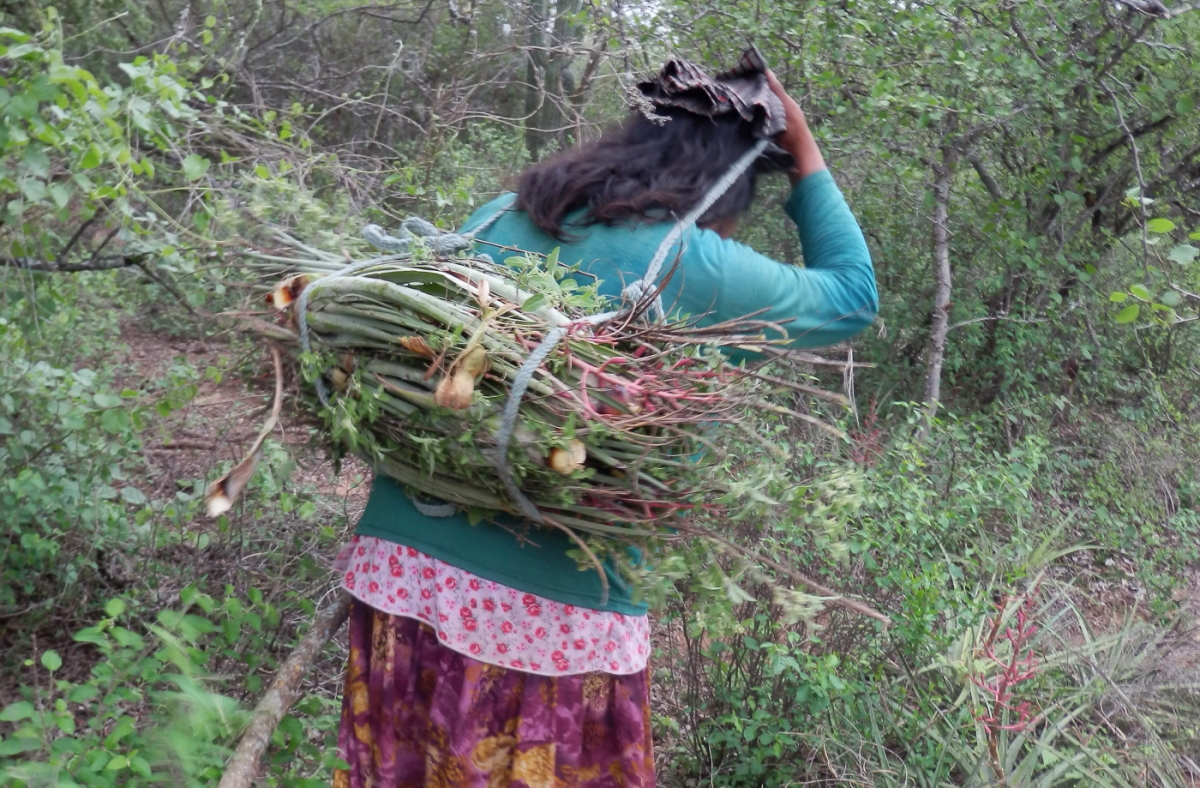 The purpose of this short text is to highlight the importance of the vegetation, the forests of the Argentine Chaco and their biodiversity for the Wichí people. To this end, I present an overview of the role of native plants and ecosystems within this native culture. I will do so on the basis of the observations, results and conclusions I have obtained in the course of the research I have been carrying out for more than 15 years on Wichí ethnobiology, that is, on the relationships that this culture maintains with its environment, with the ecosystems and the beings and landscapes that shape them. These relationships include how they conceive, name, classify and use plants, animals and other beings, the different landscapes or spaces of their habitat, and natural phenomena; and why they do it as they do (both symbolically and pragmatically).

In the Gran Chaco, the region that constitutes the territory of the Wichís in northern Argentina is characterised by its native forests which, despite the region’s lack of water, constitutes an oasis, home to countless plants, animals and other living beings of unique biodiversity. Centuries ago, the indigenous people knew how to adapt to the marked seasonality and inclemency of an area that presents serious obstacles to subsistence, and it is here that for centuries and centuries their daily lives have been lived, created and recreated in accordance with the natural environment, and vice versa.

Plants and vegetation as a whole occupy a central place in Wichí culture and society. They are present everywhere in the different areas of their daily life. In food, for example, there are around 100 species of native plants registered as food, the vast majority of them wild. Fruits, tubers, flowers, roots, resin and herbs form the basis of the diet of this traditional gathering people. Combined with fish, meat and fats from wild animals, eggs and honey, they provided a varied diet despite the scarcity of food during the winter, the harshest time of the year. Many changes have been taking place in the diet since the arrival of the settlers and in line with the associated socio-environmental changes. Today, refined flour and sugar, sugary industrial drinks, yerba mate, fats and salt abound in daily life. The lack of free territory to hunt, fish and gather, massive deforestation due to agribusiness and other extractive activities, the loss of associated biodiversity, the shift from seasonal nomadism to sedentary (or semi-sedentary) lifestyles, the scarcity of economic resources to access quality commercial food, among other factors, have led to the current situation, where little food and nutritional impoverishment are commonplace. Thus, many forest foods have fallen into disuse and are even unknown (at least the details of their preparation and/or use) by the younger generations in many Wichí communities and families. This is true for foods that were very common in the past, such as ohnak (‘sacha sandia’ in local Spanish, Capparis salicifolia), änhyuk (‘poroto del monte’, Cynophalla retusa), newok (‘mandioca del monte’, Marsdenia castilloni), or aloja de algarroba (the fermented drink par excellence in Wichí culture), based on the fruits of jwa’ayukw (‘algarrobo blanco’, white carob, Prosopis alba), as well as, and even more so, for unusual foods that were mentioned by only a few people, such as the flowers of atsukw (‘bola verde’, Anisocapparis speciosa) or the seeds of tsemlhäkw (‘yuchán’, Ceiba chodatii). However, all these foods are interesting forest products for a varied diet of the local people and have a great potential for their projection and commercialisation for local benefits. Despite this, there is a lack of scientific information on their nutritional composition, details of their ecology, among others.

In medicine, plants and the forest also play an important role. In the Wichí conception there is a distinction between minor ailments and real illnesses; the latter are life-threatening and must be treated not only physically but also spiritually, so that the husek (soul, goodwill) is repositioned within the body and balance is recovered. Herbs and other medicinal species have always been used to treat minor ailments or disorders, symptoms of illnesses and to help the work of shamans, healers and biomedicine to heal the illnesses. Nowadays, the number of species used for medicinal purposes has apparently increased compared to the past due to a number of socio-environmental factors, such as the Wichís’ thirst for knowledge and experimentation, the exchange of information among Wichís, Creole and other neighbours, the lack of access to careful and quality care in the state medical system, the decline of shamans (who have always been persecuted for their practices contrary to the precepts of Christian religions and hegemonic science), the appearance of new health problems and, as the Wichís themselves affirm, the worsening of the general state of health, which goes hand in hand with nutritional impoverishment and changes in diet. Phytotherapy is nowadays mostly used for prevalent diseases, such as skin disorders, digestive and respiratory problems, fever and female cycle issues. In a small portion of the Wichí territory alone, in the centre of the Chaco of Salta province, I have been able to record the use of 115 wild plant species for more than 400 medicinal applications to treat 68 ailments and/or symptoms.

We could go on at length and explain the role of plants in other aspects of the past and present life of the Wichís. The plants of the forests and other native environments are raw materials for building houses and decorating them; for extracting textile fibres and making clothes, utensils and other objects; for dyeing textiles, such as face paints; for magic or spells; for curing and feeding animals; for repelling insects; among others. But plants are not only raw materials or elements with utilitarian importance. Their cultural importance also lies, of course, in the symbolic and metaphysical field. According to the Wichís, it is not only animals, humans, fungi and plants that inhabit and pass through the world. Metaphysical beings or “spirits” live in different parts of the cosmos and also have specific links to plants and forests. Many plants of outstanding cultural importance, such as the chitsaj (‘cháguar’, Bromelia hieronymi; food plant and central to textile art, from which fibres are extracted) or the aforementioned white carob tree (a plant with countless associated uses and symbolisms), as well as entire forests and other areas, are cared for or used by some of these beings, so that certain actions by humans (Wichís and non-Wichís) of carelessness, excessive extraction, among others, lead to undesired socio-environmental consequences. Certain stories explain and highlight particular relationships between humans, animals, spaces and certain plants from mythical times. Moreover, it is in certain places in these ecosystems of the Wichí territory that transcendent events that are preserved in the memory of the people took place: these events are reflected in countless toponyms (place names) that tell of their location and characteristics.